August 16: Favorite Underrated Books. As is completely normal for me, I’m listing entire series instead of one book because what is moderation? When I fall in love with an author I fall HARD and I read everything they’ve ever written.

Clicking on the author’s name will take you to the Goodreads page for the book which is blurbed under each photo. Enjoy. 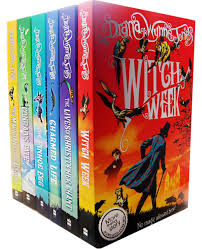 “Witch Week features the debonair enchanter Chrestomanci, who also appears in Charmed Life, The Magicians of Caprona, and The Lives of Christopber Chant. Someone in the class is a witch. At least so the anonymous note says. Everyone is only too eager to prove it is someone else—because in this society, witches are burned at the stake.”

WHY DON’T MORE PEOPLE BOW TO THE MAJESTY WHICH IS DIANA? She’s Neil Gaiman’s favorite author and if that doesn’t make you want to run out and read her I don’t know. Classic children’s fantasy at its best, that’s Diana.

“Arriman the Awful, feared Wizard of the North, has decided to marry. But his wife must be a witch of the darkest powers . . . A sorcery competition is held to discover which witch is the most potent and fiendish. While glamorous Madame Olympia conjures up a thousand plague-bearing rats Belladonna, the white witch, desperately wants to be a wicked enchantress. How can she become more devilish than all the other witches?”

Ibbotson excels at wacky, wild, witty plots stuffed full of humor and with a surprising dark side. 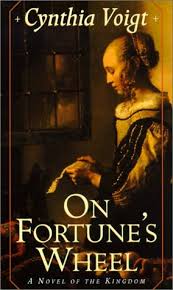 “There are some who say that the Lady Fortune
has a wheel, and all men are fixed upon it.
The wheel turns, and the men rise, or fall,
with the turning of the wheel.”

“Even after she discovers the mysterious stranger is Orien, a Lord and as unreachable to an innkeeper’s daughter as a star, Birle is determined to travel with him as far as he will allow. Their travels take Birle to a world far from home, a world where Lords may become slaves, where Princes rule by fear, and where Fortune’s Wheel turns more swiftly and dangerously than Birle could have imagined.”

Cynthia Voight is the author you want when you need lush, richly imagined fantasy alongside having your heart ripped out and repeatedly stomped on. And then a happy ending.

“Alianne is the teenage daughter of the famed Alanna, the first lady knight in Tortall. Young Aly follows in the quieter footsteps of her father, however, delighting in the art of spying. When she is captured and sold as a slave to an exiled royal family in the faraway Copper Islands, it is this skill that makes a difference in a world filled with political intrigue, murderous conspiracy, and warring gods. This is the first of two books featuring Aly.”

Yes, okay, I know Tamora isn’t exactly “underrated”. But I don’t see her on bookstagram a lot, so I’m sticking to myself on this one and saying more people should read her. Like you. You should read her.

“The ancient tree The Ellcrys, created by long-lost Elven magic, is dying. When Wil Ohmsford is summoned to guard Elven princess Amberle on a perilous quest to gather a seed for a new Ellcrys he is faced with the Reaper, the most fearsome of all demons. Wil carries with him the powerful legacy of the Elfstones, a magic strong enough to witstand any demon. But the stones take much more than they give and Wil is without power to control them….”

Terry Brooks uses a very old fashioned type of “tell” writing, but the action stays nonstop and the imagination behind every facet of Shannara is amazing so don’t let that put you off. He makes Tolkien look like he wasn’t even trying when it comes to world building. Plus, each and every Brooks novel passes the Bechdel test and he was writing in the late 1980s, WAY before such things were trending.

Let me just throw Robin McKinley in there for you again

“As Princess Lissla Lissar reaches womanhood, it is clear to all the kingdom that in her beauty she is the image of her dead mother, the queen. But this likeness forces her to flee from her father’s madness; and in the pain and horror of that flight she forgets who she is and what it is she flees from: forgets almost everything but the love and loyalty of her dog, Ash, who accompanies her. But a chance encounter on the road leads to a job in another king’s kennels, where the prince finds himself falling in love with the new kennel maid . . . and one day he tells her the story of the lost princess Lissla Lissar, who had a dog named Ash.”

Brutally beautiful. Deerskin comes with some well-deserved trigger warnings, but who ever said olde fairy tales were sweet, easy stories anyway? When you think about it, the fairytale The Coat of Many Colors/Allerleirauh is terrifying. Robin McKinley retells it with a rough, dark kind of beauty and even some hope.

2 thoughts on “Friday Favorites is So Underrated”